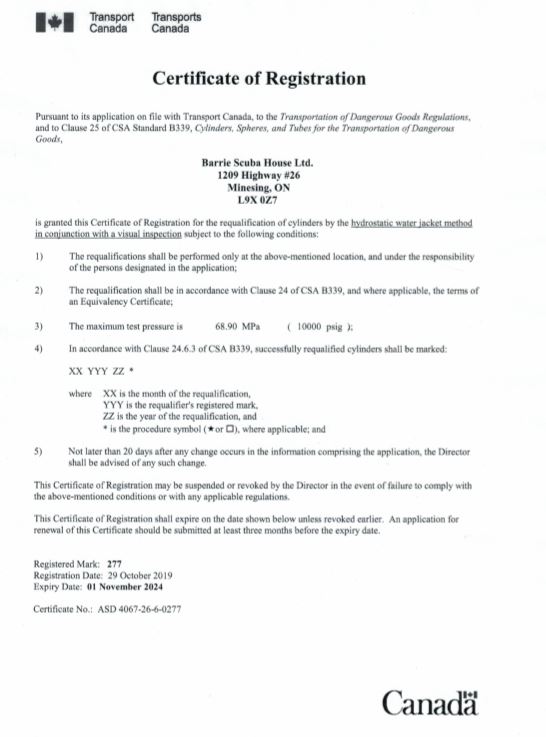 Barrie Scuba House is a Transport Canada certified Hydrostatic Testing Facility.  We can safely test and certify most scuba, CO2 and Oxygen tanks with a quick turnaround time.

Testing a tank in this way checks for permanent expansion or over expansion of the tank walls, indicating unsafe structural deficiencies. All testing is done within a water jacket to ensure safety in case of a catastrophic tank failure.

Why is Hydrostatic testing necessary?
Because it’s the law! Pressure tanks (including all SCUBA tanks) are regulated by Transport Canada. Every tank must pass an initial Transport Canada certification, visual inspection, and hydrostatic test before we will sell it, and before being filled.

How often do my tanks need to be tested?
Transport Canada mandates a new hydrostatic test every 5 years after the initial test, some special tanks are 3 years hydro tests.  Visual inspections are required yearly on scuba cylinders.

What are the common reasons for tank failure?
Improper care and maintenance cause corrosion and surface gouging.

If my tank fails, can I still use it?
Transport Canada regulations states that a tank that fails during hydrostatic testing cannot be filled again and will not be given a test stamp. No reputable dive shop will fill a tank without a hydro test stamp.